The Gaming Division, pursuant to a memorandum of understanding with the Missouri Gaming Commission, provides criminal and regulatory enforcement of gaming operations within the state. Under the command of Captain Larry W. Plunkett, Jr., the division is divided into four sections: Administrative Services, Investigations, Eastern District Enforcement and Western District Enforcement. The Gaming Division is one of the Patrol's largest divisions, with an authorized strength of 128 uniformed members and three civilians. The staffing of 128 troopers assigned to the Gaming Division does not impact or reduce the number of troopers assigned to patrol Missouri roadways, as allocated by the legislature.

The Gaming Division was established on May 1, 1994, by order of Colonel Fred M. Mills, and was the first new division established within the Patrol since the creation of the Division of Drug and Crime Control in 1983. Strict criminal and regulatory enforcement, as well as meticulous investigations are essential elements to the successful regulation of legalized gambling in Missouri. Because of its history of service with distinction and integrity, the Patrol was given the responsibility of providing investigative, regulatory and criminal law enforcement services, which ultimately police the gaming industry.

The Investigative Unit, under the supervision of Lieutenant Edward J. Aylward, conducts comprehensive background investigations of individuals, companies and suppliers applying for licensure with the Missouri Gaming Commission. The Investigative Unit was involved with 73 investigations during the past year to determine the suitability of licensees, suppliers and vendors. The unit is responsible for providing oversight and conducting investigations related to Missouri's 235 licensed charitable gaming operations and is also charged with conducting background investigations on both charitable gaming and riverboat supplier companies. 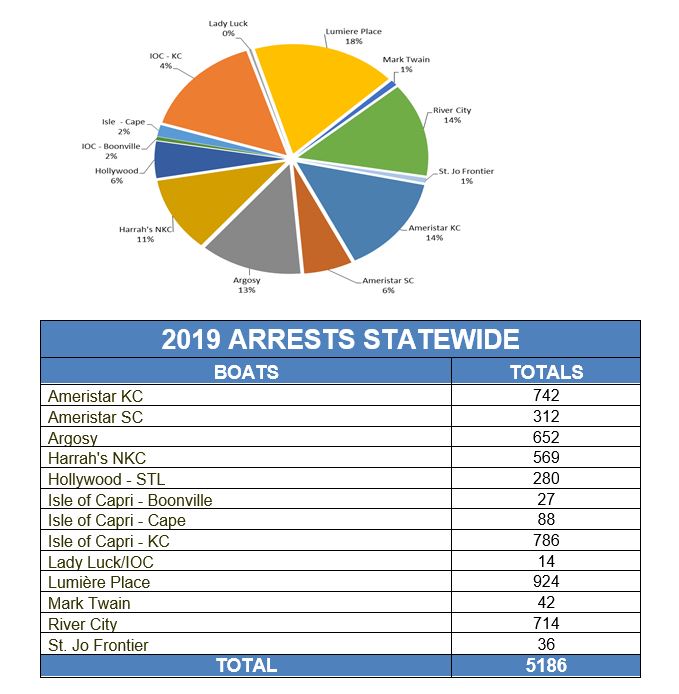