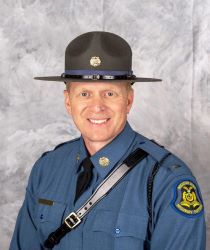 Captain Jason Pace was appointed to the Patrol on July 1, 1997. He is the statewide recruitment coordinator. He is assigned as the Director of the Recruiting and Community Outreach Division at General Headquarters in Jefferson City.

“Growing up in a law enforcement family I was able to observe firsthand the dedication, commitment, and sacrifices of a police officer. I wanted to carry on that tradition and be of service to others, thus I chose a career with the Missouri State Highway Patrol, a premier law enforcement agency. The Patrol has been part of Missouri’s communities since its inception, and this division focuses on cultivating closer relationships with individuals, groups, and businesses. As part of the recruiting and community outreach team, I strive to lead others to one of the Patrol’s many career opportunities for both sworn members and civilians.” 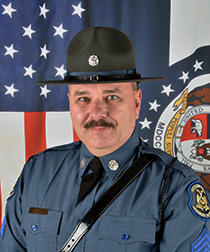 Sergeant Brad Haggett was appointed to the Patrol on August 1, 1993. He is assigned as the full time recruiter for Troop E, Poplar Bluff and Troop G, Willow Springs. He is responsible for recruitment activities in the South Central and Southeast regions of Missouri.

"I am living my dream of being a Missouri State Trooper. Growing up in southeast Missouri I regularly came in contact with the local Troopers that frequented my family's general store. As a boy I was so impressed by their demeanor, uniform and patrol car that I knew at an early age I wanted to be a part of the Missouri State Highway Patrol. As I grew older the early impression and desire only grew stronger. Our organization is one that prides itself on integrity, professionalism and character. I am proud to be a part of an organization that serves and is respected by the citizens of the state of Missouri. I have an exciting career, and enjoy sharing my experiences with others that might rise to the challenge of being a Missouri State Trooper. As a recruiter my goal is to seek out individuals who possess the qualities to become a trooper and have a sincere desire to serve the public." 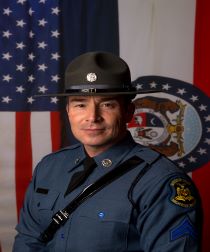 Sergeant Richard Stewart was appointed to the Patrol on March 15, 2000. He is assigned as a full-time recruiter responsible for recruitment activities in the Northwest region of Missouri, covering Troop A, Lee's Summit and Troop H, St. Joseph.

"When I was in 5th grade my Elementary School teacher's husband was a Missouri State Trooper. He would have lunch with our class from time to time. I remember how impressive he looked in uniform, as well as his polite and professional demeanor; he made a positive impression on me at an early age. I often think of him and strive to leave the same positive impression. I am proud to be a part of such a respected and diverse organization that values its employees and holds a high level of standards. As a recruiter I enjoy talking with, and educating people about the Patrol as well as sharing our core values of Integrity, Responsibility, Respect, Professionalism, Compassion, Resourcefulness, Character and Commitment. I don't know of a better way to serve your community and have the ability to affect positive change within your community than being a part of the Missouri State Highway Patrol." 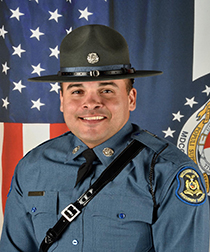 Corporal Antonio Sandoval was appointed to the Patrol on January 18, 2004. He is assigned as a full-time recruiter responsible for recruitment activities in the Western region of Missouri, covering Troop D, Springfield and Troop I, Rolla.

"I chose to apply to the Missouri State Highway Patrol, because of the respect and expectation of high standards citizens have for State Troopers. Having been a police officer prior to becoming a Trooper, I saw firsthand how professional and selflessly dedicated Troopers were to their duty. I am now proud to be a part of such a great organization of men and women. As the recruiter for Troop D and Troop I, my goal is to seek out diverse service oriented applicants who are willing to accept the challenge of earning the title of Missouri State Trooper." 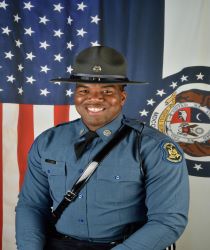 Trooper Kordel Gibson was appointed to the Patrol on January 3, 2011. He is assigned as a full-time recruiter responsible for recruitment activities in Troop B (Macon) and Troop C (Weldon Spring).

"My first career path was not law enforcement until I met a Trooper one day and he explained to me the role of a Missouri State Trooper. He explained that being a Trooper was not just about writing tickets. He said Troopers do things like change people’s tires, give directions to people that are lost, and save lives. I remember he told me, “We are here to protect but also to serve.” He really stressed, Troopers serve the communities in which they live. As part of the recruiting and community outreach team, I’ll strive to recruit diverse individuals that are looking to make a difference in the communities they serve." 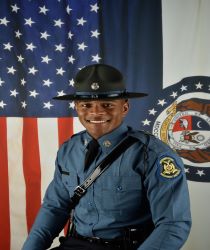 Trooper Gary Daniels was appointed to the Patrol on July 1, 2015. He is assigned as a full-time recruiter responsible for recruitment activities in the Northwest region of Missouri, covering Troop A, Lee's Summit and Troop H, St. Joseph.

“Growing up in a law enforcement and military home, taught me respect, compassion, integrity, and commitment. So, when I chose to apply to the Missouri State Highway Patrol, it felt right because the organization holds the same values to a high standard. The life of a trooper is challenging both mentally and physically but so rewarding. Being a member of the patrol is a blessing, and life changing. As a recruiter, I want to share with individuals what it takes to be a trooper and have a successful career in serving citizens in the great state of Missouri.” 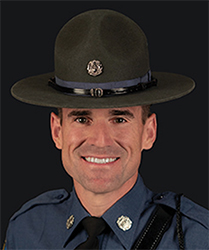 “From my earliest recollection while growing up in Jefferson City, I was impressed by my parents, relatives and acquaintances who served the state of Missouri in an area of law enforcement,” said Trooper Malone. “I knew I wanted to serve all the people of our great state. As a trooper with the Missouri State Highway Patrol, I have been afforded the opportunity to serve in many challenging assignments. As a recruiter, I am looking for diverse individuals who can meet the high standards of the Missouri State Highway Patrol and are willing to serve the people of our great state.”