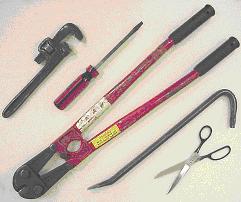 Evidence submitted in toolmark cases may include tools such as: bolt cutters, screwdrivers, scissors, knives, pliers, crowbars, and saws. Objects where toolmarks might be observed are: wire, sections of sheet metal, chains, safety-deposit boxes, human bone or cartilage, padlocks, doorknobs, bolts, and a variety of other materials. 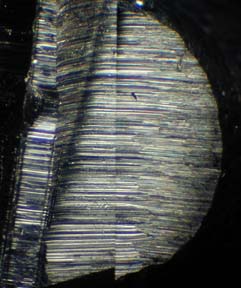 Toolmarks are scratches and/or impressions that are left on an object that is softer than the object or tool that caused the marks. The barrel (harder object) that leaves markings on the surface of the fired bullet (softer object) is an example of a toolmark. The same principle is applied when the tip of a screwdriver scratches a metal surface; the tip of a pry bar scratches or indents a door jamb; or the cutting edge on the blades of a pair of bolt cutters leaves striations on the cut padlock shackle. The unique and individual imperfections on the tool surfaces that are transferred to the softer surface of the damaged object can be used to make a positive identification. To make a positive identification of the tool that may have been used to cause the striations or indentations.

Minute scratches (striations) produced by tests made in the crime laboratory by the questioned tool, will be compared to the striations noted on the evidence toolmark areas. The forensic scientist (toolmark examiner) using the comparison microscope will conduct comparison examinations to determine whether or not a particular tool may or may not have caused the markings on the evidence.

Impressed marks are also considered to be toolmarks. For example, the tip of a screwdriver that is used to punch or indent a metal surface but does not penetrate the object will leave an impression that can be identified to that tool. Other tools such as center punches, chisels, hammers, and even larger objects such as car bumpers may leave identifying marks and impressions that, when compared in the crime laboratory, will identify or eliminate the tool or object as being the one that made the impression.